56 Stories in 56 Days – The Disappearance of Lady Frances Carfax

Posted on October 31, 2011 by barefootonbakerstreet 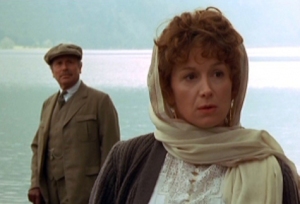 “Oh I remember this one,” says husband, “it’s got something to do with a coffin,” writes Charlotte Anne Walters.

Yes, it does involve a coffin and a very clever way to get around needing a death certificate for someone you have tried to murder.  It’s funny how sometimes we remember the stories by the inanimate objects which they contain – such as a pince-nez, a pencil or a deadly cardboard box.  But the interesting point about this story is that Holmes sends Watson abroad alone to make preliminary researches into the disappearance of Mrs Carfax, a lonely middle-aged woman.  This does show a high-degree of trust but then he ends up being completely critical of Watson’s efforts in his usual abrupt manner – “A very pretty hash you have made of it!”

As usual, Watson simply forgives this rather rude and ungrateful outburst and they carry on together with the investigation.  Watson is a very forgiving man and sometimes behaves like a submissive wife.  It’s one of those stories when you want to reach into the pages, take hold of him and shout – “Come on Watson, man-up!”  Poor Watson had told us at the start of the story that he was feeling ‘Rheumatic and old’ but then landed up feeling like a failure.

Lady Carfax is forty and when I first read this story as a youngster I distinctly remember thinking how old this was.  The lady I pictured in my head back then was grey, wrinkled and past her best.  Now that I’m in my thirties my whole attitude about the story is different and I picture a glamorous lady travelling around Europe turning heads with her style and sophistication.

I do find the story a little dull until the rather sinister discovery of the unusual coffin.  It certainly is a shock when Holmes opens it up to find a genuine dead person in there who died of natural causes.  But then, of course, he realises why the coffin was so large for such a small old lady and rushes to stop coffin leaving for the funeral.  This time he forces open the lid and finds two bodies inside, the lifeless old lady and a chloroformed Lady Francis who is moments from suffocation.  This is a fantastic twist in the tale, I remember how completely unexpected it was the first time I read it.

Holmes is very active in this one too, bursting into the house without a warrant twice, waving a gun around and shouting the orders – very dramatic.  The stories are often full of brawn as well as brains and this one is a fine example.

The disappearance of Lady Frances Carfax scores 8 out of 10.

Author from Shropshire
View all posts by barefootonbakerstreet →
This entry was posted in 56 Sherlock Holmes stories in 56 days. Bookmark the permalink.