Posted on November 19, 2011 by barefootonbakerstreet 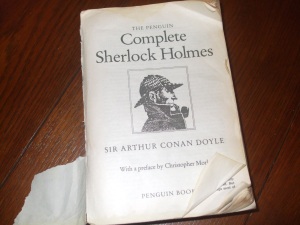 For those of you who aren’t aware, I’ve just completed a bit of a blog-a-thon which involved reading and reviewing one of the 56 Sherlock Holmes short stories a day until I had covered them all, writes Charlotte Anne Walters.

The reviews are still on the site so just scroll down if you want to read through my thoughts on each story.  For those of you who were patient enough to stick with me until the end, you will be aware that I gave each story a score out of ten.  Now that the dust has settled after my blogging adventure, I thought it was time to go through my results and start making some analysis of my findings – starting with a list of which stories gained the highest marks:

So is there a pattern here?  Is there something which these particular stories have in common that ensured their high score or is it just coincidence that they appear in this list together?

Well, I suppose the best way to sum things up is to say that I clearly enjoy the stories where Holmes uses his extraordinary powers of observation and deduction to bring light into darkness, to solve that which seems initially unfathomable but once unravelled is simple and clear.

I like to see the science of deduction at work; this is what makes Holmes so different to other fictional detectives.  It’s the innate way that he can look at something and make a split-second series of connections which would never even occur to anyone else.  Like in Silver Blaze when he asks if any of the sheep have been lame recently and upon hearing that they have, is able to confirm his theory that Straker had tried to make Silver Blaze lame with a knife knowing he would have had to practice on another animal first.

All these stories contain moments like this – classic Holmes full of energy rushing around with his magnifying glass or breaking into houses to observe the smallest but most crucial of details.  I like to see Holmes being brilliant, almost super-human, I like being able to witness that great but complex brain frantically hunting down a solution in the most workman-like fashion.  Deciphering the code in the Dancing Men, following the steps in the Musgrave Ritual, analysing the mark in the stonework at Thor Bridge, the smell of the paint in the Retired Colourman and playing his part so convincingly in the Dying Detective – all the things I love most about this fascinating character and the workings of his mind.

I also enjoy the stories which reveal details about the closeness of the central friendship between Holmes and Watson – I like to see Holmes show his heart.  The main examples of this are contained within these stories – the line ‘If you love me’ in the Dying Detective, the overwhelming concern for Watson’s welfare when in danger as shown in the Three Garridebs (when he is shot) and the Dying Detective (when he lifts the box with the poisoned spike).

I enjoy the stories which contain humour too, often at the expense of a difficult client or the police.  This is evident strongly in Silver Blaze (toying with a sceptical Colonel Ross), Six Napoleons (where the police fixate on completely the wrong line of inquiry) and the joyous out-witting of the murderous Retired Colourman.

The story also has to work well in its own right, it has to be a great Holmes story and have a brilliant plot to score a top mark.  Some of the tales are only one or the other – a great little story but not much Holmesian action (The Veiled Lodger for example) or vice-versa.  I think my top stories work on both levels and combine fascinating detection work with a cracking, well-written plot.

When all these ingredients combine, you get a perfect Sherlock Holmes short story.  I suppose the only one on my list which doesn’t perfectly fit this pattern is Milverton.  Holmes doesn’t do a huge amount of detection work, nor does he shine light into darkness but Milverton is such a fantastic villain that this makes up for the lack of these elements.

In summary, I clearly enjoyed reading about Holmes at his energetic, twinkly-eyed best, charging around making brilliant observations, breaking into houses, outwitting criminals and police alike, showing his heart as well as his brain, saving the day and raising the occasional smile too.  Phew, I don’t ask for much do I?

Author from Shropshire
View all posts by barefootonbakerstreet →
This entry was posted in 56 Sherlock Holmes stories in 56 days. Bookmark the permalink.