What Jeremy Brett brought to the role of Sherlock Holmes – tenacity

Posted on December 14, 2011 by barefootonbakerstreet 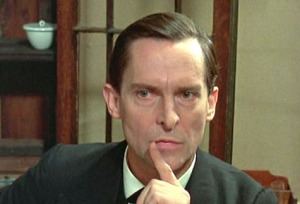 In preparation for tonight’s debate about the different actors who have played Holmes and what they each brought to the role, I did a little research into my personal favourite and was reminded of how much he had to overcome in order to continue with the Granada series, writes Charlotte Anne Walters.

Jeremy Brett was, in my opinion, the best screen-Holmes and his performances were engaging and timeless.  However, in order to continue with the role and complete a staggering 41 episodes in total, Brett had to overcome the death of his wife just before the filming of the third Granada series, a breakdown, a diagnosis of manic-depression and the side-effects of taking lithium.

He still managed to film the two-hour adaptation of The Sign of Four despite having only recently being released from hospital and continued with the third series even though he needed an oxygen mask on set and was battling against drugs which robbed him of his energy and caused weight-gain.

Brett had an enlarged heart, the valves of which had been damaged by a childhood bout of rheumatic fever and it was heart failure which ultimately caused his death in 1995.  To see how much love there is in the international Holmes community for Brett and how regularly he is still talked about (via many Facebook pages, websites, the campaign to award him a posthumous BAFTA etc.) sixteen years on, is testament to what a fantastic Holmes he really was and how he captured the imagination of so many people.  I am not aware of any other Holmes actor receiving this level of recognition.

At his best, Brett played an energetic, eccentric and accurate Holmes – with a twinkle in his eye and a perfect blend of humour, intelligence and depth.  He even kept a 77 page file on set which detailed all Holmes’ mannerisms and habits in order to keep his portrayal as accurate as possible.

At worst, he was clearly ill, over-weight and struggling to continue.  I cannot help but admire the tenacity it must have taken to do this, especially playing such a complex and often dark character when experiencing mental-health issues in real-life.   No other actor had to endure so much to play Holmes.

Author from Shropshire
View all posts by barefootonbakerstreet →
This entry was posted in Sherlock Holmes. Bookmark the permalink.