Posted on January 2, 2012 by barefootonbakerstreet 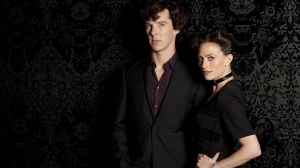 I’ve just seen BBC’s Sherlock, and it was brilliant.

How do I know that it was brilliant?  Well, my husband sat through the whole thing without fidgeting or wandering off.  And he never does that.  Ever.  Not even during the rugby.

It was simply stunning – engrossing, clever and impossible to look away from.  I loved it.

I didn’t watch Sherlock when it was aired last night due to a terribly sore throat and a very early night.  I turned to the wonders of Sky Plus and recorded it, then curled up on the sofa under a blanket (with husband) to watch it this afternoon.  It has just ended and I feel compelled to blog straight away to try to put into words why I loved it so much.

Writer Steven Moffat has done what I thought to be impossible – taken one of the original stories from the canon (A Scandal in Bohemia) and used it as the basis for creating something even better.  A Scandal in Belgravia righted the wrongs I have always had issues with in the original and made Adler into a proper match for Holmes, a brilliant femme fatale not just someone who realises she has been caught out and scarpers.

This Adler is complex, bisexual, smart, wrong, breath-taking and vulnerable all at once.  The sexual tension between Adler and Holmes is brilliantly played, cranked up spectacularly by the end of the episode.   Linking her to Moriarty is hardly new, but it is done here far better than I have seen before.

And Moriarty really is fantastic, updated into a camp, twisted villain in a sharp suit.  The line which went something like – ‘If you are telling me the truth, I’ll make you very rich, if not, I’ll turn you into shoes,’ was a particular favourite.  I really felt quite proud of myself for my Moriarty in Barefoot, until I saw what the Sherlock team have done with him.  Right now, I feel a bit out-classed.

It’s all there, the canonical references cleverly inter-woven, the high-drama and relentless twists and turns, the surprise ending, the superior humour (much better than the slap-stick clowning in the Guy Ritchie films – in my opinion).  And the up-dating is a joy to watch – Adler’s images being on a mobile phone rather than simply a photograph, the ‘royal’ being female rather than male, the world hearing of Sherlock through John’s blog etc.  The moment where Sherlock grabs a deerstalker from a theatre dressing-room to hid his face from the press – genius.  The relationship between Sherlock and John is brilliantly played too by Benedict Cumberbatch and Martin Freeman.  I’ve even got used to them being Sherlock and John, rather than Holmes and Watson – which I never thought I would.

I need to stop gushing now, maybe it’s just my high-temperature making me over excited but I really do feel like I have just witnessed historic television.

Author from Shropshire
View all posts by barefootonbakerstreet →
This entry was posted in Barefoot on Baker Street. Bookmark the permalink.