Great Sherlock Holmes Debate – and the winner is . . . Holmes himself

Posted on March 20, 2012 by barefootonbakerstreet 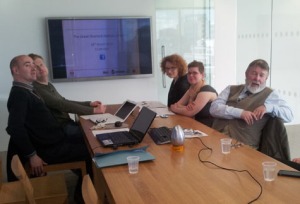 Some of my team who backed BBC Sherlock

On Sunday I was fortunate enough to take part in The Great Sherlock Holmes Debate organised by Steve from MX Publishing.

The event was situated in the fabulous Met Building with a wonderful view across the London skyline and we were joined by ten international Holmes fans dialling in from other countries.  The discussion was certainly a lively one and I think my team did a pretty good job of arguing on the side of BBC Sherlock against the Warner Bros film franchise.

It’s difficult to sum up everything that was discussed because so many opinions were flying around that it was difficult to take it all in – especially when you are sitting there feeling pretty nervous about your own contribution.

Much criticism was heaped on Robert Downey Jr for being everything from too short and scruffy to basically playing Holmes as a Victorian version of Tony Stark (his character in Iron Man).  Jude Law was roundly praised for his interpretation of Watson and it was even suggested that the roles should have been reversed – a very interesting idea but as someone pointed out, RDJ is a highly bankable star and it would be unlikely a film company would risk a $125million budget on the shoulders of Jude Law.  There was also general praise for Jarred Harris’ Moriarty but the film franchise did face heavy criticism for its over-reliance on action sequences, canon inaccuracies and over-the-top humour.

Team Warner Bros raised the argument that the films have the biggest reach of any other Holmes franchise and therefore do more for the future of Holmes than any other.  However, that argument was swiftly rebutted by the point that this is only true if those viewers then turn to the original stories.  It was generally agreed that though Sherlock has fewer viewers, those that do enjoy the series are more likely to read and enjoy the canon.

Sherlock was praised highly for its canonical references and the genuine love which the creators Steven Moffat and Mark Gatiss obviously have for the source material.  The interactive nature of the show was also mentioned along with its highly active fan-base.

It was generally agreed that the forthcoming CBS series, Elementary, is seen as a blatant rip-off of Sherlock despite trying to distance itself by casting Lucy Liu as a female Watson.  Kristina from the Baker Street Babes floated the idea that it would have been better to change the gender of both Watson and Holmes.  This was responded to positively and is certainly an interesting idea.

It was also agreed that casting Liu was another example of trading off the publicity created by enlisting a bankable star.  For me, one of the things which make Sherlock so great is the fact that the series is license payer-funded and therefore doesn’t have to make money.  This gives the creators a freedom which other adaptations simply don’t have.  Hurrah for the BBC, I knew my TV license would come in handy one day.

So which team won?  Well, it’s difficult to say because we didn’t have a post-debate vote but I do think Team Sherlock had the edge.  But then, perhaps I’m biased.  I think the overall winner was Sherlock Holmes himself.  If the popularity and success of the debate is anything to go by, the world’s favourite detective is more loved than ever before – his star is certainly in the ascendent.

4 Responses to Great Sherlock Holmes Debate – and the winner is . . . Holmes himself