Posted on September 19, 2012 by barefootonbakerstreet 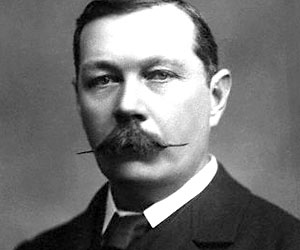 Isn’t it interesting how different generations are introduced to Sherlock Holmes in new ways?  What a great testament this is to the adaptability and timeless appeal of one of fiction’s most loved characters.

We have three generations of Holmes fans in our family – my husband who is 46, me at 34 and my younger step-son Charlie who is 14.  Husband Tim discovered Holmes in the traditional way, simply through reading the canon.  This was prompted by finding the original works of Sir Arthur Conan Doyle in his prep-school library as a child.  This interest has been sustained throughout his life and he has re-read each of the stories many times.  His earliest memory of seeing Holmes on screen was watching Basil Rathbone bringing the great detective to life, assisted by the lovable but rather foolish Watson as portrayed by Nigel Bruce.

I first encountered Holmes in my early teens – watching Jeremy Brett command the screen in the faithful Granada adaptations.  He was ably assisted by a competent and reliable Watson in the form of Edward Hardwicke.  I came upon the series too late to see the David Burke episodes but discovered them later via VHS video tapes.  So captivating was Brett’s performance, his compelling ability to display the eccentricity and instability of Holmes, that I was absorbed by the character and keen to discover more.  Chancing upon The Hound of the Baskervilles at a second-hand book stall was my introduction to the original stories.  I eagerly read my way through them all and have remained a fan ever since.

Charlie saw the 1st Guy Ritchie Sherlock Holmes film and enjoyed it very much but it did not make him want to read Sir Arthur’s stories – despite heavy persuasion.  He read my novel, Barefoot on Baker Street, and this ignited interest and discussion about the source material.  Then he received a Kindle for his Birthday.  Finding out that he could download the canon for free heightened his curiosity but it was watching BBC Sherlock on DVD and Sky Plus that really sealed-the-deal.  He loved the rich storytelling and how the episodes demonstrated Holmes’ unique method so visually.  He is now enthusiastically working his way through the canon on his Kindle, and loving it.  He’s even read my new book – 56 Sherlock Holmes Stories in 56 Days – and we have lively discussions about the ratings I gave to each story compared with his own opinion of it.

So there you have it – books and Basil, Granada, Brett and second-hand paperbacks, then finally pastiche, Kindle and Benedict Cumberbatch.   Three generations, one family, different introductions but the outcome is still the same – life-long Sherlock Holmes fans.

And what do these experiences have in common?  It was discovering the original stories that really captured us, regardless of how we found them, and has stayed central to our admiration ever since.  Other things come and go – films, TV shows, and pastiche – but the 56 stories and four novels by ACD remain at the heart of our enjoyment.  Timeless.

These experiences encapsulate our changing reading and viewing habits too – from TV and video to DVD and Sky, from paperbacks to ebooks.  How will the next generation first encounter Holmes?  At least now that there has been a resurgence of interest, I feel more confident than ever that they will – somehow.