Posted on October 15, 2019 by barefootonbakerstreet 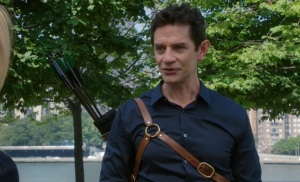 The answer, it seems, is in recent Sherlock Holmes adaptations.

In BBC Sherlock it was a fall from grace, a metaphor, rather than Holmes plunging towards an actual swirling abyss. In Elementary, Reichenbach is a person (the villainous Odin Reichenbach) rather than that famous watery grave that claimed Moriarty in The Final Problem and almost Holmes himself. Not a waterfall in sight. It’s as if everyone is falling over themselves trying to come up with a clever way of doing something that worked just fine in the original. A bit like when fancy chefs present their unsuspecting dinners with a de-constructed cheesecake involving chocolate soil. At least Granada let Holmes play out his final battle with Moriarty atop the Reichenbach Falls, as per the original, and was all the better for it in my opinion.

I think my biggest issue with Elementary remains unchanged. It’s a perfectly fine and enjoyable drama, but why make it Sherlock Holmes? It’s too far removed, too diluted to really be a Holmes series. Give those central characters other names and it would work just fine – albeit so much more difficult to market and publicise.

In the beginning, I didn’t like Elementary. I thought it was a poor relation to BBC Sherlock and too distant from the original canon. Over time I came to enjoy it’s rhythms, it’s formulaic nature – there’s comfort in that. You know what you are getting, unlike BBC Sherlock which seemed to switch genres a few series in. The crimes are generally very clever with a good sense of the macabre, ‘pretty’ little problems that stay at the heart of each episode. The producers make a reasonable fist of demonstrating Holmes’ method and of all the modern adaptations, I think they portray the friendship between Holmes and Watson in the most sensitive and authentic way. But it remains a police procedural and the central characters work in an official capacity with the NYPD. Original Holmes was always on the margins, brought in by sceptical police when all else failed and often ridiculed until the final reveal.

In Elementary we see Watson working alongside Holmes as a detective, almost his equal, and though I really like the character, it misses the point. Watson should be capable, brave, loyal but remain the everyman/woman character who the reader can associate with. He is always a doctor, an assistant and biographer, but never a detective.

Elementary’ s final episode threw in everything, as if this was the last chance to get in as many canonical refs as possible. We have Moriarty, Watson writing a book, Altamont, Sigerson, Adair and a corrupt card game, they came thick and fast. Too little too late perhaps?

For all my criticism, I will miss dipping in and out of this inventive and comforting modern interpretation. I like Elementary, I applaud their bravery even though for me, the show is 20% Holmes and 80% good quality cop drama. And at the last, I would have liked a big thunderous waterfall with a tangle of flailing arms and legs falling into its terrible depths. To the next crop of Holmes writers, I cry – ‘Bring back the waterfall!’

Author from Shropshire
View all posts by barefootonbakerstreet →
This entry was posted in BBC Sherlock, Elementary, Sherlock Holmes and tagged BBC Sherlock, elementary. Bookmark the permalink.