About Barefoot on Baker Street

Barefoot on Baker Street is a novel by Charlotte Anne Walters which was published by MX Publishing on September 20, 2011.

It is set in the world of late Victorian London, where a life of crime is the only way to escape poverty and servitude for one bright, young, workhouse orphan.  The narrative follows Red on her incredible life-journey, in the form of a memoir, as it twists and turns through poverty, riches, infatuation, loss and love.  Becoming entangled with a dangerous and sinister criminal puts Red onto a collision course with Sherlock Holmes, who is the focus of a powerful childhood infatuation, and the resulting machinations propel her into adventure, tragedy and maturity.

The story is not told by the familiar voice of Doctor Watson and Holmes is not the central character.  Barefoot is someone else’s story, someone fresh, intelligent, street-wise and, crucially, female.   This allows traditional characters to been seen from a new perspective giving greater insight into their personalities and world.

Central themes of infatuation, loss, poverty, social inequality and the journey into maturity are something all readers can associate with, but detailed historical research and sensitive inclusion of source material gives plenty for the Holmes admirer to enjoy.

Here’s what some reviewers have said:

“Barefoot on Baker Street is Charlotte Anne Walters’ first novel, and the seven years’ of work she devoted to it have had impressive results.” – The Well-Read Sherlockian

“Walters tackles some pretty horrific scenarios, making me appreciate just how hard city life was (is) if you came from the wrong side of the tracks. The book moves at a relentless pace.” – Alistair Duncan in the journal of the Sherlock Holmes Society of London

“It is fast paced and I could not put the book down! I was up into the early hours reading it and I was enthralled by the exciting build up to the conclusion of the story!  Red is such a bold and memorable character.” – Charlotte Smith, My Tin Dispatch Box

“When I first started this book, I wasn’t sure whether I would enjoy it as Sherlock Holmes is not top of my wish list. However, the central character, Red, is a force to be reckoned with and her character evolves dramatically throughout the story. It gets better and better as the book progresses, with a truly authentic feel, and quite soon reaches a point where putting it down isn’t an option.” – Amazon review

Charlotte Anne Walters is a senior recruitment manager and lives in Shropshire with her husband Tim, a journalist.  Charlotte has previously worked as an actor, presenter, and freelance writer.  Barefoot on Baker Street is Charlotte’s first novel.

To celebrate the publication of the book Charlotte wrote a daily blog reading and reviewing each of the Sherlock Holmes 56 stories. 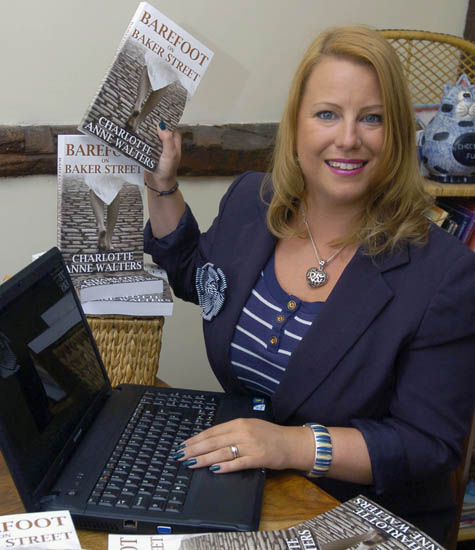 12 Responses to About Barefoot on Baker Street