Holmes and Watson – who needed who the most?

Posted on February 1, 2012 by barefootonbakerstreet 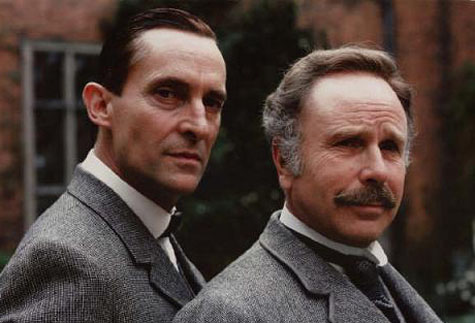 As famous friendships go, the Holmes and Watson partnership seems to have attracted more analysis than any other fictional duo.  Partnership is an interesting word to use, inferring a degree of equality and co-dependency.

Modern adaptations have demonstrated this dependency in different ways – compare the childlike, needy petulance of Robert Downey Jnr to the lonely ex soldier helping a person of questionable mental health relationship between Sherlock and John in BBC Sherlock.  During a scene in The Hounds of Baskerville, Lestrade comments that ‘seeing familiar faces appeals to his (Sherlock’s) sense of…’, to which john replies, ‘Aspergers?’ – said with a mix of truth and irony.

So who in the partnership is most dependent on the other?  I have always had the impression that Watson would survive perfectly well enough without Holmes, but without Watson, Holmes would have floundered and remained a little-known amateur.  Let us not underestimate the importance of Watson’s writings, without them the world would never even of heard of Sherlock Holmes.   And whether he liked it or not, Holmes did need that fame.  It brought him clients, including high-profile ones, and therefore the money to survive.

We only know of Holmes’ greatness through Watson.  It’s like that strange old saying about the tree in the woods – if a tree falls in the middle of a wood and no one is there to hear it, does it make a sound?  Would Holmes be great if Watson wasn’t there to tell people about it?

Watson has social skills – he is able to make friends, fall in love, experience marriage.  He has a profession too, something which can earn him a living and be done completely independently of Holmes.  But without Watson, Holmes would live a friendless existence and possibly become consumed by his own demons – the drug taking and obsessive focus on work.

But then, why does Watson keep coming back for more?  Well, put simply, he chooses to.  It’s not because he needs Holmes, but rather that he genuinely enjoys sharing in the adventures and cares for his friend.  That’s the difference – Watson can make a choice and would be fine either way.   Life would be less adventurous without Holmes, but a life none the less.

Where would Holmes have been without his biographer and sounding board?  As Sherlock comments in The Hounds of Baskerville (not exact quote) – ‘some people see the light, others are conductors of the light and you John – you are a conductor’.  Watson was an integral part of Holmes’ thought process, and he also acted as a counter balance, softening out the hard edges at the perimeter of Holmes’ complex personality.  Without Watson, I argue that Holmes would have been incomplete.

Without Holmes, Watson might have been bored, less-travelled, unpublished and unknown but would be a successful practitioner with a family and friends – children and grandchildren happily filling up the years.  He didn’t need Holmes, but rather he chose to share his world.

12 Responses to Holmes and Watson – who needed who the most?